The Australian and South Australian governments have jointly committed $560 million for the projects, which will support 770 full-time jobs each year during construction, and provide better and safer access to the beautiful Fleurieu region for motorists, as well as benefiting local communities and tourism operators.

Deputy Prime Minister and Minister for Infrastructure, Transport and Regional Development Barnaby Joyce said the projects demonstrate the Federal Liberal and Nationals Government’s commitment to deliver for people of the Fleurieu.

“The Australian Government is investing in and delivering the infrastructure that South Australians need and deserve,” the Deputy Prime Minister said.

“This is another example of the Federal Liberal and Nationals Government’s record $110 billion infrastructure investment plan in action, helping to connect communities and improve safety, while creating jobs and supporting our economic recovery.”

The Australian and South Australian governments have listened and responded to extensive community feedback in adopting design solutions. These include:

- Duplication of Main South Road, from Seaford to Aldinga, including a grade separation (overpass) at the intersection of Tatachilla Road/Maslin Beach Road.

- A planning study to further investigate the preferred solution for Victor Harbor Road between Main Road, McLaren Vale and Tatachilla Road and to Willunga Hill

“There was 92 per cent community support for the Stage 1 duplication of Main South Road between Seaford and Aldinga, which will improve road safety and boost productivity,” Minister Wingard said.

“A survey of local residents showed 86 per cent of respondents supported a grade separation at the intersection with Tatachilla Road.

“During the five year period from 2015 to 2019, on the section between Griffiths Drive and Aldinga Beach Road, there were 187 reported crashes including two fatal crashes. Vehicles using this route will increase from 18,000 to 26,000 per day by 2036.”

Following community feedback, a grade separation was also identified as the preferred solution at the intersection of Port Road and Main South Road, Aldinga. The current single-lane roundabout causes significant delays for motorists during peak periods.

“To finalise the preferred solutions, we listened to community, and competed further traffic modelling and technical analysis,” Minister Wingard said.

“Common feedback from the community was that duplication south of Aldinga wasn’t critical and may negatively impact the character of the area.

“Other treatments to improve the safety of the area were, however important. The undulating nature of Main South Road, particularly north of Norman Road, was also consistently raised as a matter of concern.

“Along with traffic modelling that has identified duplication of this section is not needed until after 2050, we have proposed a ‘2+1’ lane road layout which is a three-lane road, consisting of two lanes in one direction and one lane in the other, alternating every few kilometres.

“This is something the RAA has also considered to be suitable for the next 20 plus years in their submission to the South Australian Department for Infrastructure and Transport.

Senator for South Australia and Minister for Finance Simon Birmingham said consultation with the Fleurieu community had led to the best outcomes for projects that will see motorists get to where they need to go sooner and safer.

“Through engagement with local residents better designs have been achieved without compromising future room for growth, while ensuring taxpayers are also getting the most value for their money,” Minister Birmingham said.

“These plans will deliver better and safer roads across the Fleurieu as well as reduce travel times for local residents and tourists.

“Our Government is helping to deliver a steady pipeline of infrastructure projects across the state that will play a critical role in the ongoing economic recovery and jobs revival.”

“These projects are incredibly important to south coast communities and our Government has listened to and acted upon the concerns and needs of local residents,” Senator McLachlan said.

“As a growing region and one of South Australia’s best tourist destinations, it is important we invest in making it safe and easy to travel to the Fleurieu Peninsula.” 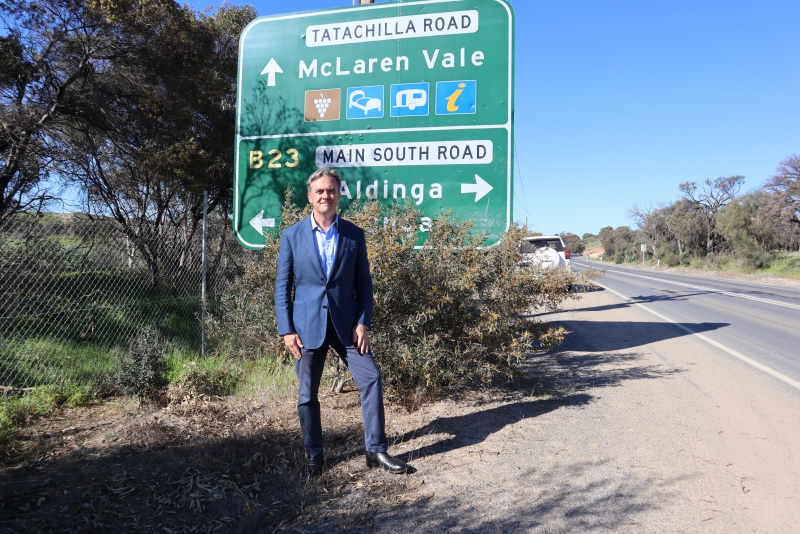